Radio Ecoshock: If you are looking for a nerdy distant discussion of international law, this isn’t it. Pella is a spark-plug connecting people who care about our future, all over the world. Pella Thiel has been invited to the Radio Ecoshock show, in the US.

Pella Thiel: The Collapse of Meaning

For the really big picture we go to the environmental hero from Sweden: Pella Thiel. Listen to or download this Radio Ecoshock show in CD Quality (57 MB) or Lo-Fi

If you kill a human that is crime. You will be punished. If you kill a river or a forest that is not a crime. It may be part of your business plan, producing profits for shareholders. Wiping out species and poisoning places is not a crime – but it should be! Pella Thiel shows how we can make that happen, starting where we are now.

Pella Thiel is a leading Swedish ecologist fighting to change that. She works tirelessly to get the new crime of “ecocide” enshrined in International Law. This is not an obscure legal thing. And Pella is not demanding an end to everything humans do. She comes out of the Swedish Transition Network, Chairs the non-profit End Ecocide Sweden, and coordinates the Swedish Network for Rights of Nature. Pella Thiel was appointed Swedish “Environmental Hero of the Year” for 2019.

Pella is a spark-plug connecting people who care about our future, all over the world. Check out this StopEcocide web site to follow this important activism.

There is a platform of international law where we can begin. About 123 countries have agreed to four major crimes, in the Rome Statute. The four crimes are genocide, crimes against humanity, war crimes and crimes of aggression. You have heard of them, many of us take them for granted. With these charges, people have been arrested and brought to the Hague to stand trial, convicted, and imprisoned.

Now we need to add a fifth great international crime: ecocide. The Pope supports ecocide as an international crime. The Swedish labor movement supports it. French President Macron supports it, in part because of such strong support for the Greens in the summer of 2020 elections. The government of Belgium is working on it.

Two of the State parties to the Rome Statute, Vanuatu and the Maldives, put this on the table in the Hague. Their countries are likely to go underwater due to rising seas under the climate regime. On November 17, top legal experts formed to write a legal definition of ecocide. This is major progress.

Pella talks about the environment group “Friends of Lake Erie”. That “Great Lake” in North America is a victim of industrial agriculture leading to poisonous algae blooms, making it undrinkable. When that basic need like water disappears we are already in big trouble. A town on Lake Erie says the lake has rights. That has been opposed, but it has been proposed. There has been no concrete action.

Another example comes from New Zealand, which has a strong aboriginal community. A forest and a river has been acknowledged as a “person” with rights. The river an be represented by guardians in the legal system. One representative is from the government, and one from the Maori. They are the human face of the river, and can speak for the rights of the river in court cases or policy-making. There is a budget to monitor the river. All this reminds me of the children’s’ stories where animals meet in a Parliament of animals.

Sweden’s Pella Thiel sent me a follow-up email. Right on his campaign web site, the Biden/Harris team promises to implement the basic thrust of the ecocide law. The Biden campaign says, quote:

“Biden will direct his EPA and Justice department to pursue (pollution) cases to the fullest extent permitted by law and, when needed, seek additional legislation to hold corporate executives personally accountable – including jail time where merited.”

In our interview, Pella brings up another advantage for pressing this new ecocide law into the Rome Statutes. Those 123 countries have agreed the Rome Statues crimes will also be crimes in their own national legal systems. If we get Ecocide law done in the Rome Statues, it becomes law for much of the planet. Corporations tend to avoid international crimes, banks will not finance companies who commit those crimes, and criminal corporations can not buy insurance either.

Imagine genocide is proven against a major company. They will be shunned. Now let’s do it for ecocide.

SWEDEN – AHEAD AND BEHIND

Sweden has a history of environmental leadership. The first international conference on the environment was held in Stockholm in 1972. Fifty years later, Sweden has asked to hold next development conference by UN – in Stockholm in 2022. Greta Thunberg is far from alone as inspiring voices and groups coming out of that country. Radio Ecoshock has also found top-rated climate science coming from Sweden.

But even though the King of Sweden awarded Pella that medal for her environmental heroism, she criticizes her own country. Sweden is often ranked number one for sustainability, but has one of the largest technological footprints. Swedish people still consumes as though there were four Earths. Thiel says even the Swedish are hypocrites. The forests are hardly forests now. They have become plantations, not real ecosystems anymore. Why do we say “we are so good” – even though we can’t reach environmental goals set 20 years ago?

In Sweden they have one of the few truly Indigenous people in Europe. That is Sami land, which has been colonized by the Swedes. (It used to be called “Lapland” by the English). There is conflict between the two societies, and forest extraction or mining over-rides indigenous voices, several even recently and continuing. Our system does not admit their world-view, even though they are so sustainable that you cannot see their existence in the land-scape. They touched it so lightly. A big company is building a plant to build electric batteries in the north, in Sami land,. That sounds sustainable, but those mines are not good for nature, even though they bring jobs and “wealth’ to the North.

Check out this excellent English-language interview with Pella Thiel in the Sweden in Transition Podcast hosted by Sonia Le Masne. (Season 2, Episode 18)

WHEN CAN HUMANS STOP TAKING – AND START GIVING TO NATURE?

Pella says there is no end to the extraction we want to do. Humans are always trying to expand their sphere. We want to mine the moon, other planets or asteroids. We are unable to say “enough” – no more development, which is now something destructive. We need to look at what development means. We truly need sustainable development, which takes less, and does it more efficiently – but even that is against what we could GIVE to nature, instead of taking. Nature is always a collection of objects for us to use, not a group of living creatures which also want to exist.

Of course I have questions about how ecocide law can work. The legal concept of ecocide also supposes there is a government able to control multinational corporations, instead of being controlled by them. Do we need corporate support to make this really work? What could be changed in corporate law, perhaps in the registration of corporations, which always include purposes, but seldom limitations. In the days of kings and queens, the Monarch granted patents for corporations, like the East India Company. Those patents might exclude development by the company in certain companies or parts of the globe. So we have a long-standing mechanism back in early law – perhaps that can help us think that limits of corporations are possible?

Can we protect the rights of nature, not just in our country, but everywhere – and still have an economy that can shelter and feed seven and a half billion people? If there is a mass famine in some country, which still seems quite possible, perhaps people there will blame the ecocide laws for limiting business. Will we compensate business for what they would have made, if a particular ecosystem were not protected? Or is that like compensating a thief?

Pella makes us think. She challenges us. Pella winning makes some people uncomfortable. Even though she says ecocide laws do not dictate an end to corporate profits, or that we give up anthropocentric views, – something in our core, almost an unthinking action in our lives, makes us think domination is not just necessary to survive, but our right. If we have an ability, we should do it. But this ability can make us thrive for a short time in history, and then bring a broken climate, disappearing species, and finally mass human deaths. The whole depends on a system of limits, developed by the various species unconsciously as part of evolution. But now, super-predators with higher intelligence, must, for the first time, put limits on its own ability to kill.

The pandemic virus has already learned that lesson. If a virus is too deadly, it kills the host faster than it can spread to new victims. Humans are like a virus, wanting to expand infinitely, living as a predator on other species, both animals and plants. But if we kill too much, too fast, then we fall down.

Humans must learn what the virus already knows: limits are the key to continued existence.

Many humans have already learned to limit their desires. Under long-standing laws, we don’t kill other humans even if we want to and could. There are many other limits we set on ourselves and agree to socially. We need to add a new one which consists of two things:

1. The various parts of the natural world need a voice in human law and decisions and
2. The rest of nature has a right to exist, and ecosystems have a right to thrive. 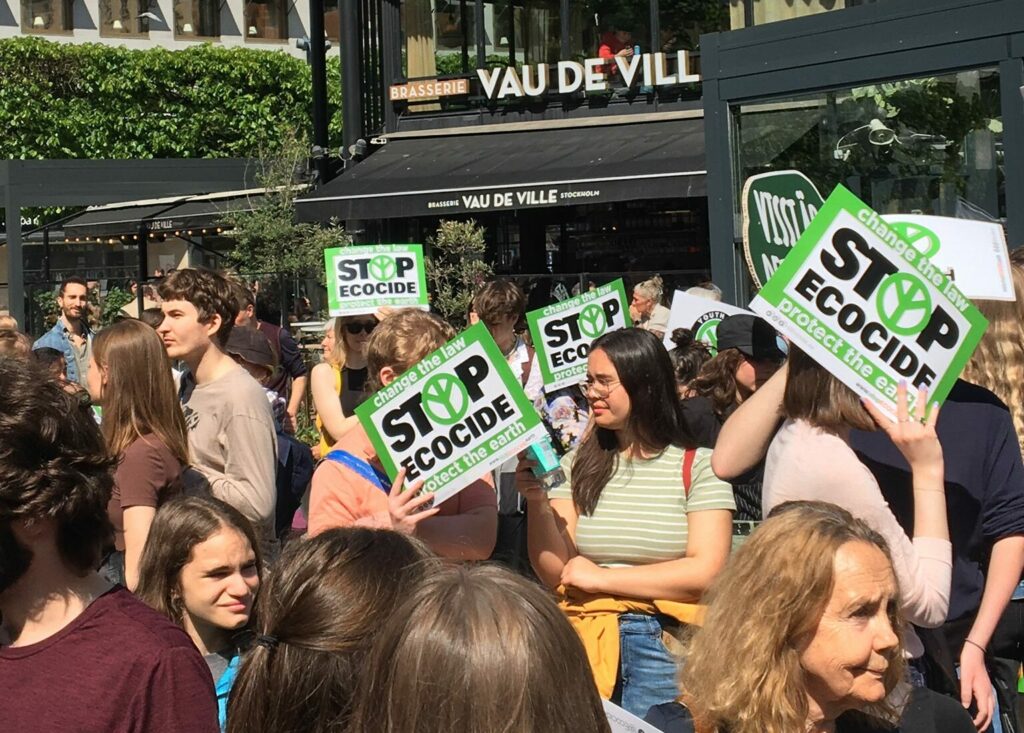 This website uses cookies to improve your experience while you navigate through the website. Out of these, the cookies that are categorized as necessary are stored on your browser as they are essential for the working of basic functionalities of the website. We also use third-party cookies that help us analyze and understand how you use this website. These cookies will be stored in your browser only with your consent. You also have the option to opt-out of these cookies. But opting out of some of these cookies may affect your browsing experience.
Necessary Alltid aktiverad
Necessary cookies are absolutely essential for the website to function properly. These cookies ensure basic functionalities and security features of the website, anonymously.
Functional
Functional cookies help to perform certain functionalities like sharing the content of the website on social media platforms, collect feedbacks, and other third-party features.
Performance
Performance cookies are used to understand and analyze the key performance indexes of the website which helps in delivering a better user experience for the visitors.
Analytics
Analytical cookies are used to understand how visitors interact with the website. These cookies help provide information on metrics the number of visitors, bounce rate, traffic source, etc.
Advertisement
Advertisement cookies are used to provide visitors with relevant ads and marketing campaigns. These cookies track visitors across websites and collect information to provide customized ads.
Others
Other uncategorized cookies are those that are being analyzed and have not been classified into a category as yet.
SPARA OCH ACCEPTERA
Drivs med